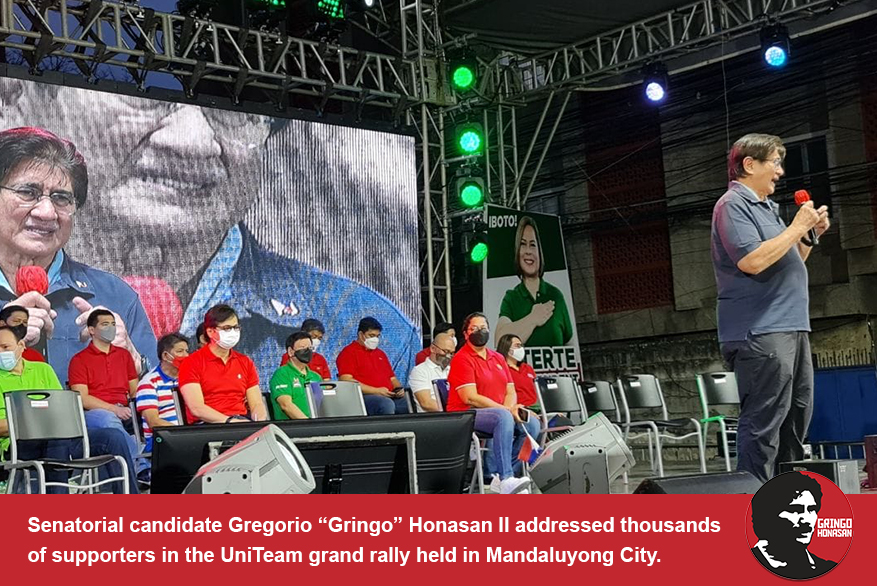 Dubbed as a native “Mandaleño” or a son of Mandaluyong, Gringo finished high school at the Don Bosco Technical College.

Gringo spoke of his experience as a soldier for 17 years, a Senator for 21 years, and DICT Secretary for two and a half years. If re-elected, he says, he will continue his previous platforms and programs which includes: 1) an expansion of RA No. 11037 or the Masustansyang Pagkain para sa Batang Pilipino Act; and 2) the refiling of Senate Bill No. 23, which provides for the purchasing of crops from farmers for feeding programs in public schools and Senate Bill No. 67, which authorizes the wiretapping of drug lords. Gringo also plans to advocate for the passage of a Comprehensive 30-year National Development Program, a law mandating the installation of CCTVs with facial recognition across the country, and laws that would drive the acceleration of the country’s digital transformation.

Urging people to unite, he emphasized the need for everyone to help one another:

“Ang tanging solusyon sa napakaraming problemang kinakaharap natin ay ang pagtutulungan. Hindi ito kakayanin ng isang pangulo, isang pangalawang pangulo, isang senador, isang gobernador, isang mayor…Kailangan po talaga, magtulungan tayo.” [The only solution to the many problems we’re facing is to help one another. This cannot be solved by one president, one vice president, once senator, one governor and one mayor. We all need to help one another.]

He also spoke of access to truthful information that will help voters make responsible choices that will eventually impact their lives, their families, their communities, and the nation.

He says that we are doing this for our most precious and strategic resource, the next generation of Filipinos and leaders, our children and grandchildren.

In addition to his long military career, Gringo is a four-term senator and former DICT Secretary.